Although nursing home abuse is a well-known problem, many still underestimate how common it is. Fortunately, elder abuse statistics in nursing homes allow us to better understand the overall issue and why it occurs.

Elder abuse statistics in nursing homes provide a snapshot of why abuse occurs, who is most at risk, and what can be done if someone is suffering from abuse.

“Elder abuse will not stop on its own. Someone else needs to step in and help.”

Our team has compiled and organized statistics on nursing home abuse from leading organizations like the National Council on Aging (NCOA), the World Health Organization (WHO), and the National Center on Elder Abuse (NCEA).

Use these statistics to get answers to your questions and learn how you can help. If your loved one is suffering from abuse and neglect, speak with a trusted nursing home abuse lawyer in confidence.

How Common Is Nursing Home Abuse?

Nursing home abuse affects thousands of families each year. In 2020 alone, over 15,000 complaints filed with nursing home ombudsmen were about abuse or neglect.

A 2018 National Center for Victims of Crime (NCVC) report states that people living in nursing homes are vulnerable to various forms of abuse by staff and other residents alike.

The NCVC’s breakdown of nursing home abuse complaints is as follows:

Nursing home abuse is just one part of the larger problem of elder abuse. As many as 5 million people are affected by elder abuse every single year, according to the NCOA.

Like all other crimes, though, not every case of nursing home abuse gets reported, and researchers are trying to determine exact figures. This is further complicated because some seniors may be unwilling — or unable — to report their experiences.

“Unfortunately, we simply do not know for certain how many people are suffering from elder abuse and neglect.”

If you know someone who is in assisted living, familiarize yourself with abuse in nursing homes statistics to ensure your loved one does not become part of the tragic problem.

Who Is at Risk?

Who Does the Abusing?

Anyone can commit elder or nursing home abuse, but family members and nursing home staff are some of the most common offenders.

Family Members
According to the NCOA, family members commit more than half of all elder abuse and neglect cases, with two-thirds of abusers being spouses or adult children. Mental health and substance abuse problems may increase the risk of elder mistreatment.

In-Home Caregivers
As an alternative to nursing home living, nurses or other caregivers can be hired to help an older person in their own home. However, these caregivers may also commit neglect or abuse.

Nursing Home Staff Members
Staff members who are frustrated, exhausted, or manipulative may harm the residents they’re supposed to care for. A 2020 WHO study found that over 64% of nursing home staff members admitted to committing some form of abuse or neglect.

Other Nursing Home Residents
Staff members are not the only ones to worry about in long-term care facilities — other residents are just as capable of committing abuse. For example, in 2021, a nursing home resident who was also a registered sex offender assaulted another resident multiple times. In this case, the nursing home was also at fault, as administrators failed to report the assaults to the police.

Environments That Can Lead To Abuse

While abuse can happen anywhere and to anyone, some environmental factors described below can increase the likelihood of abuse.

Sadly, COVID-19 only worsened the already widespread problem of elder abuse. Pandemic-related elderly abuse statistics in nursing homes point to even more cases than before.

“Rates of abuse of older people have increased during the COVID-19 pandemic.”

The National Institutes of Health (NIH) estimates that as many as 1 in 5 seniors experienced elder abuse during the pandemic, an increase of 83.6% from before COVID-19.

Reasons for increased nursing home abuse and neglect during the pandemic include:

If your loved one suffered from nursing home abuse or neglect during the COVID-19 pandemic, you may still be able to get justice. But don’t wait — there are time limitations to take legal action. Get a free legal case review today. Nursing home abuse comes in many forms, including physical, emotional, sexual, and financial, and it is not always obvious. Below, get statistics about the different types of nursing home abuse.

Physical nursing home abuse occurs when a patient is harmed by force (such as a shove, punch, or slap). It can lead to long-term health problems like concussions, broken bones, or even death.

Elders can also be emotionally abused with threats, intimidation, social isolation, and more.

Sexual abuse is any form of unwanted sexual contact from another person.

Though it is very upsetting, being aware of sexual abuse in nursing homes statistics is the best way to make sure your loved one does not fall victim.

Connect with an experienced nursing home abuse lawyer in confidence if you suspect abuse.

Financial abuse happens when an individual’s financial resources are exploited or withheld.

Nursing home neglect is the failure to provide a resident’s basic life necessities, such as food, health care, or hygiene. While it may not always be intentional, nursing home neglect can have just as serious consequences as abuse. 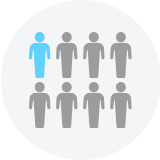 After learning these alarming statistics, many people wonder if you can sue for nursing home neglect. The answer depends on several factors, which must be considered on a case-by-case basis.

Connecting with a trusted nursing home abuse law firm is the best way to find out what legal options you and your loved one have.

No matter where elder abuse occurs — in a nursing home or a personal residence — it can devastate a senior’s life and cause a lot of pain for their family. It can also lead to wide-ranging financial problems.

–The National Center for Victims of Crime

One of the more unsettling nursing home abuse and neglect statistics is that the NCVC found that for every case of elder abuse that’s reported, 24 are not.

Reporting rates are so low for a few reasons:

The population of adults aged 65 and older is expected to increase over the next several decades. This suggests that the issues of elder and nursing home abuse are likely to become even more prominent.

However, family members and loved ones can take steps to protect their loved ones.

Here’s what to do if you or someone you know is being abused:

You may also wish to consider seeking legal assistance.

Victims of nursing home abuse and neglect often cannot defend themselves without help. They might not want to risk angering the nursing home staff and making things worse for themselves. They could also be unable to take legal action due to cognitive problems like Alzheimer’s.

If you suspect your loved one is suffering from abuse in a nursing home, take the first step and get a free case review. We can evaluate your situation in confidence and connect you to an experienced nursing home law firm.